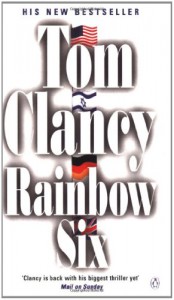 Clever, intricate, rich in world-detail, but... why is this guy a novelist? This is clearly a videogame or a series of 24 (at least it became one of these). As a book it mostly sucks. Every single time I read prose which just details a series of actions I think 'This person's using the wrong medium for their story.' He shot him he shot him back. If an author has a cast of hundreds that they don't care to detail in the slightest beyond that character's nationality and some 90s wife and kids cliches, well... I get it I do. The level of drama we're dealing with here is conflict between nations, not intra/interpersonal drama, I get it. Again, I think the novel's a pretty bad format for that since it's the only format where we can look inside the character's head, whereas this is mostly exposition-based, how can I put it... Michael Bay wouldn't get nearly as much money if he just asked us to imagine an exploding building.

I appreciate the effort and the well-researched speculative terrorism, and perhaps that's where it does use some of the qualities of a novel. Clancy can afford to take time to explain complex biological warfare concepts and intricate hierarchical structures of secret organisations, but I guess there needs to be some hook, some reason to learn these things, and for me that would be investment in the characters, which leads me back to the idea that they weren't detailed enough.

This is not my thing, either because it genuinely shouldn't be a novel, or if it should, I think it's a very limited type and not one I want to read.